This past Friday DeLeon celebrated their Homecoming. Since the twins' cousins Tanner and Cody both play football on the varsity team and Cody was nominated for Homecoming King, Mom and the girls made the journey from Seminole to DeLeon to attend the festivities. They met up with Mimi, Aunt Chelle, Cousin Bailey, and Cousin Neeley to cheer on the Bearcats at the Friday afternoon Pep Rally and then headed out for the game on Friday night.

While the outcome of the game could have been better, the team played hard -- we all think Cousins Cody and Tanner were especially good :) -- and the girls had a great time cheering them on. Before the game the Homecoming Queen and King nominees were presented. Cousin Cody was escorted by his mom (Aunt Chelle). 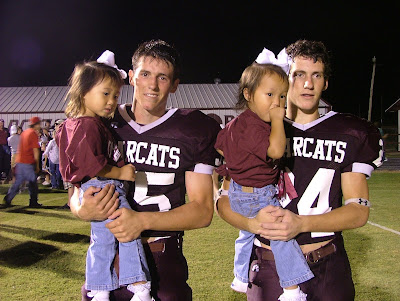 To see more pictures of DeLeon Homecoming click here (Click on the "i" on the first slide to see captions).

There were lots of other activities over the weekend spent at Aunt Karen's house, playing with Cousins Neeley and Slade, seeing new baby cousin Jake, and watching Cousin Bailey play in a volleyball game but you'll have to wait for another post for those pictures!

NOTE - After a long hiatus Mimi has returned. Wrapping up a two year project in New York City, moving back to Texas, getting settled in my new home, and hitting the road traveling every week since early June has just taken so much time and energy that there hasn't really been much time for serious blogging. Mom has done a great job posting but the writing part just isn't her favorite thing and says she's too happy to pass the baton back to Mimi. I have many pictures to share so will be continually adding them as I try to keep up with current posts -- more about that later -- but glad to be back! 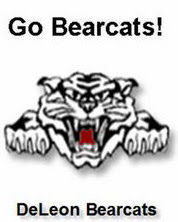 Check out my Slide Show!

Check out my FunPix! 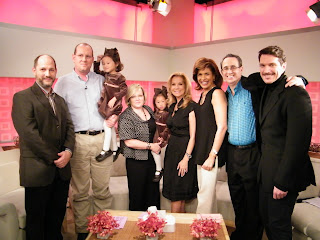 Here is the website of Robert Maniscalco, the man that did the portrait for us. It is absolutely beautiful.
http://www.maniscalcogallery.com/
Words can not express how thankful we are to have had this experience and to meet these wonderful people. Thank you to all the people at the Today Show, Kathie Lee Gifford, Hoda Kotb, Jayme Baron, Paulo Szot, David Friedman, and Robert Maniscalco.
The song was amazing, how honored we are to have our very own song to share with the girls as they grow older.

tara
Our long journey to our precious children began in 2004. My husband and I decided to adopt after we lost our three beautiful children to a drunk driver in 2004 in Texas. We felt that we still had a lot of love to give and an empty heart to fill again so we chose to adopt from China. I will have to say this "pregnancy" has been the worst - a lot longer than 9 months. Our paperwork went to China in July 2005, and then we waited, and waited, and waited! We hoped for twins, not knowing if it would happen but after all “you can always try”. Our hopes, wishes, and most of all prayers were answered and October 10, 2006 we were united with our two precious little girls from Fuzhou, in Jiangxi Province. This is our journey.